钩子, also known and commonly referred to as "Hooks", are a type of 地图部件 featured in 黎明杀机

When in proximity to a Hook that hasn't been sabotaged or has not been broken from an earlier sacrifice, the Killer carrying a Survivor is given the opportunity to hook that Survivor, placing them onto the Hook.
If a Survivor is killed by the Entity on the Hook, the Killer will be unable to use the same Hook on another Survivor. The Basement Hooks are an exception to that.

For Survivors, Hooks have three different stages. Stages 1 and 2 each have a duration of 60 seconds:

or just the Perk 破坏手

equipped, have the opportunity to walk up to a Hook and sabotage it, breaking it temporarily in the process.

Killers are unable to hook a Survivor on a sabotaged hook, and will have to look elsewhere, potentially losing the Survivor on their shoulder if another Hook is not near enough.

in the Boldness Category, but once the 逃生大门

are powered - you won't receive any more Bloodpoints from sabotaging Hooks.

The Basement Hooks and Event-specific Hooks cannot be sabotaged. 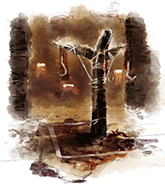 The Basement Hooks are a unique set of four Hooks located in the 地下室 that are attached to the same Hook post. They are always located in the centre of the Basement. They can't be sabotaged and also don't break upon sacrifice. This is so that in spite of all other Hooks being sabotaged, the Killer will always have an opportunity somewhere on the Map to hook a Survivor.

The Lunar Hook was a special Hook model that was featured during the Howling Grounds 活动. For every burnt Red Envelope

, a Lunar Hook would spawn on the 地图. Its 气场

would be displayed to the Killer in a blue colour, instead of the usual yellow. Hooking a Survivor for the first time on such a Hook would grant the Killer one Burnt Coin

, 40 of which would unlock the The Hound customisation option for The 女猎手.

The Grill Hook was a special Hook model that was featured during the Scorching Summer BBQ 活动. For every burnt BBQ Invitation

in addition to 2 default ones, a Grill Hook would spawn on the 地图. Its 气场

would be displayed to the Killer in a blue colour. Hooking a Survivor for the first time on such a Hook would grant the Killer one Survivor Chop

, 50 of which would unlock the Pro-Pain Hammer customisation option for The 电锯杀手.

The Cankerous Hook was a special Hook model that was featured during the The Hallowed Blight 活动. For every burnt Pustula Petals

Offering in addition to 2 default ones, a Cankerous Hook would spawn on the 地图. Its 气场

would be displayed to the Killer in an orange colour, instead of the usual blue colour used for such Event-Hooks. Hooking a Survivor for the first time on such a Hook would fill the Killer's Nectar Vial by one sixth with Putrid Nectar, with a filled Vial granting one Putrid Serum

, a temporary currency that could be used to buy the Event cosmetics from the v.

In the early days of the game, each Killer had their own personal Hook Design that was used on every Map they played on.

Survivors quickly learnt that they could identify a Killer by taking a look at the design of the nearest Hook shortly after spawning. Thus Killers relying on the element of surprise were revealed too early to the Survivors and popular tactics, like to hold off on using one's Power if it made distinct noises to disguise one's identity for as long as possible, were nullified.

The Developers realised this and changed Hooks to no longer be tied to a Killer prior to the release of the Halloween Chapter. They were from then on bound to the Realm.

Each Map has a minimum and maximum amount of Hooks that may spawn on it: