章节4：疯狂的火花 is the fourth Chapter DLC for Dead by Daylight.

Spark of Madness is a Chapter for Dead by Daylight. It holds the darkest and most experimental form of treatment - where health is not the goal, just madness. The Doctor will see you now, whether you want to or not. The only glimpse of hope is a young girl, one who never gives up and always finds a way.

Information is power. Everything is allowed. Intelligence is a weapon that must be thwarted. This Doctor will never stop, treatments will never be too experimental. A young girl who is in it to win, no matter what the game or the rules. A research institution that slowly turns into a prison.

Carter had good intentions, at first. He set out to understand the human psyche. But wars and secrecy disrupted his good intentions, and instead Carter started to experiment with more and more unwilling test subjects that entered were brought to him. Instead of understanding, he sought means of controlling. By any means necessary. Sometimes words and texts are as useful as bonesaws and electricity.

Carter’s Spark: Is it a gift or a curse? The Entity has ignited a corrupted and inexhaustible spark in the Doctor’s heart which allows him to generate electroconvulsive power at will. His vicious treatment corrupts the minds of those it touches. Victims shocked by the spark begin to lose their grip on reality and, with repeated exposure, inevitably succumb to madness.

The Doctor comes with 3 new perks.

Feng found the light in computer games early on. And she wouldn’t let go. It became her life. And a goal for her to reach. She started out with low level competitions held at internet cafés. Striving to climb the ladder. The only thing that got in her way was her lone wolf attitude. A solitary life in front of a screen fitted her perfectly. But teams...is something completely different. But what proved to be a downside in the world of the living, might just save her life in another. 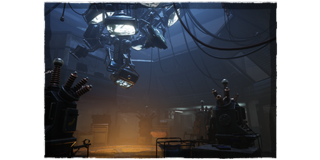 A research facility should be a place where minds grow, where learning happens. But the Léry Memorial Institute is quite the opposite. It’s a place where the human brain is turned into something unpleasant and broken.. Electricity is the everywhere and dirty tools are found laying around. The facility is a place where all methods are acceptable - as long as information is retrieved. Whether the “subject” is alive after the procedure is not important.

Nowadays the facility is abandoned but the methods are not. Snow and rust have replaced the screams and tears. A few marks on the walls and the furniture, some books… Nothing else remembers all those who lost their minds and their lives in there.