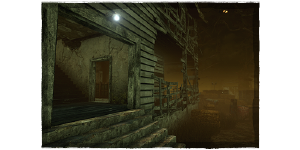 汤姆森一家 were wealthy landowners who owned the Coldwind Farm estate.

The family consist of Max Thompson Sr., Evelyn Thompson and their son Max Thompson Jr., who later became the Hillbilly.

The Thompsons were said to be savage people. They had locked their son into the basement for years as he was hideously disfigured from birth and shut away from society.

When Max Jr. managed to escape, he killed his parents and continued to live on the farm, slaughtering every animal and human being that strode too far into his domain.

The Thompsons lived in Thompson House, a farmhouse located on the Coldwind Farm.