章节5：暗黑摇篮曲 is the fifth Chapter DLC for Dead by Daylight.

A Lullaby for the Dark is a free Chapter for Dead by Daylight. Welcome to the other side of Mother Nature. A disturbing side where survival surpasses cannibalism and ends up in solitude. The Huntress will never miss her mark, she will track you, capture you and kill you. Hopefully a former rugby star might bring her down...if he doesn’t get lost in the Red Forest.

Forest of the damned

Survival is all. There are no limits to what one abandoned child will do to make it through the day, year after year after year. Meat holds no face when it’s placed above a fire to be cooked. All she seeks is shelter and a long-lost mother that nature took away. Her simple cottage is all that is left - a mad girl’s paradise in a forsaken forest. Might Mr. King stand a chance against the forces of nature...once it unleashes The Huntress? A Lullaby for the Dark is a new Chapter for Dead by Daylight. It includes a new Killer, a Survivor and a Map.

How far will you go for something as simple as another breath? What will you do still your hunger? Anna didn’t start out as the Huntress, it was the need to feed and the cold that formed her, that shaped her future self. Flesh is flesh, no matter which body it stems from. Survival quickly becomes all, as you lose those who made sure you were safe and you are left alone in a hellish forest. The Huntress was molded into something broken, into someone who simply misses her mother and is now left with nothing but an axe and a hatchet.

The Huntress comes with 3 new Perks.

Rookie of the Year

David King is not unique. Not unique when it comes to talent being destroyed by anger. Strength and speed was easy for David. He took up rugby to let out some steam. He had a knack for it. Quickly he rose to fame and people saw a grand career on the rise. But being fueled by rage instead of something positive will thwart yourself. So alcohol and bar fights became his life instead. Still trying to focus internal anger...somewhere. Soon a whole career was gone. But David kept fighting. Illegally and without protection. Friends saw less and less of him, and one day he was gone. He still holds an athletic body and a lot of anger. But now he’s facing something he’s never fought before - something that won’t die.

David King comes with 3 new Perks, designed to go right up into the Killer's face. 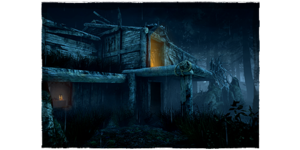 An old cottage in the woods

A home is a home for someone, somewhere. Even though others might see something horrid and scary, this cottage was once filled with love. But when loves leaves a place, there is only emptiness to fill the void. The dwelling is slowly merging with the rest of the surrounding woods. Going back to its true roots. Lumber to tree. Flickering candles can be seen late some nights, and as the wind settles, a strange melody can be heard - humming throughout the night. This seemingly abandoned place does hold guests. One willingly and many, many others by force, and outback, bodies are buried. One might stumble upon the cottage, but would feel an urgent desire to leave. To go back to something that provides warmth. The old dwelling in the forest is the opposite. It provides nothing but cold, dark, loneliness and screams that are destroyed by the wind.